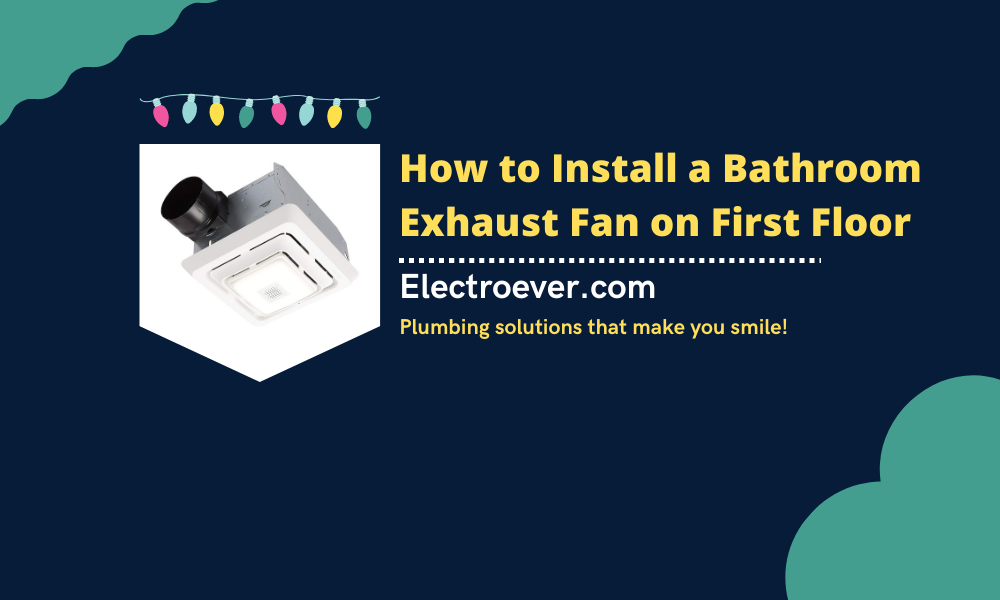 How to install a bathroom exhaust fan on first floor is one of the most common problems that people have faced for years. Many people believe that installing a bath exhaust fan isn’t that tough. Is it really tough to install?

In reality, it isn’t quite as simple as it seems! Replacing a preexisting bathroom exhaust fan takes less time because the connections are already in place. Why? Because you already know where the fan needs to be fixed. But, Installing a new exhaust fan on the first floor could be challenging to cope with.

Today we’ll explore how to install a bathroom fan on the first floor. To make things easier, we’ll disclose the step-by-step process here.

How to Install a Bathroom Exhaust Fan on First Floor

Step 1: Turn Off The Electricity

When you’re working with any electrical components, you must first disconnect certain electricity supply connections. Avoid accidentally shocking yourself while going through the process.

So your first order of business is to locate the breaker box located inside your bathroom. Simply turn that off and double-check to make sure it was turned off correctly.

Step 2:  Identify Where to Install The Bath Fan

At first, you have to decide where you want to install the bathroom fan in the bathroom. A bathroom fan should be placed in a central area and at a high ceiling to maximize airflow as a rule of thumb.

If you intend to install this fan above a shower and otherwise above a tub, make sure it’s rated for that area first. That must also be linked to a ground fault circuit interrupter (GFCI).

It’d be best to consider where the external vent hood would be installed, including where the flex duct will terminate on the exterior.

Also, it must vent to the outdoors, but you should make every attempt to keep it away from the windows and other venting terminations.

If you’re installing a new bath fan rather than a replacement, you’ll need to install Romex wiring. You’ll have to fish the cabling through the wall cavity with fish tape for existing drywall. At that time, you may need to use a long and flexible drill extension to make tiny holes through joists if there isn’t already a hole in the bathroom wall.

Make sure the wiring is long enough once it has been pulled into the bathroom and that the wiring is cut with plenty of room to spare. When it comes to wiring installation, it’s suggested that you call an electrician.

Step 4: Route a Flex Duct to The Outside

All your wiring must be complete and ready to be connected. As soon as you’re prepared, you should start pulling your flex duct outwards across the ceiling.

If the house is unfinished (i.e., there is no drywall), moving it to your desired location should be quite simple. It’s necessary to utilize any means necessary to get the drywall to the outer wall, including using fish tape.

Pulling electrical wiring is analogous to this. In addition, to get the flex duct to the right spot, you may also have to cut an access hole close to the outer wall.

If the bathroom ceiling is open, the flex duct is advised to be supported every few feet by straps that are fastened to the ceiling joists.

Step 5: Make a Hole in The Exterior Wall

When you have to route the flex duct into a wall surface, you’d need to make a hole through the wall to allow you to attach the exterior vent hood to the duct.

After completing this step, you’ll be able to complete the rest of the installation. The hole in the outer wall should always be substantially bigger than the diameter of the flex duct.

Besides that, the quickest and most straightforward technique is to use a 3/4/5-inch hole saw in conjunction with a cordless drill. On the other hand, using a reciprocating saw can be very effective.

After you’ve cut a hole in the outer wall, you’ll need to attach the flex duct to the vent hood adapter with a hose clamp.

Pulling the flexible duct through the metal collar on the ventilation hood cover should be simple and painless. You can fasten the flex duct with a zip tie or a piece of aluminum foil tape.

You’ll need to attach the vent hood to the bathroom’s exterior wall after connecting the duct. As an additional precaution, it is recommended that silicone caulking be installed around the vent hood.

If the drywall has already been installed, you’ll need to make a small exploratory hole in the wall near the intended location of the fan. Using a keyhole or drywall saw, you may quickly cut through drywall.

Once it’s been cut, the exploration hole can be peeked into to feel for joists, cabling, wiring, and ductwork. Make a slightly wider hole in the bottom of your bathroom fan housing to allow the fan blades.

It’s necessary to check the ducts or wiring fit before connecting it to the fan housing. The keyhole saw can help you enlarge the hole if you need to. Installing wood supports to the ceiling joist may be necessary as well.

Step 10: Plug-In The Housing Adapter to The Duct

Before completing the wiring, connecting the duct to the bathroom fan is usually the quickest and easiest option. Pull the flexible duct from the housing of the bath fan to the ceiling.

It’ll be much better if you’ve got a helper controlling the bath fan. Then, fasten the flexible duct to the bathroom fan adaptor using either foil tape or a plastic zip tie.

Step 11: Pull Wires Through the Housing

You must complete the wiring before attaching it to the ceiling joists to wire the housing. It’s suggested that you stick a plastic grommet just on the housing of the bathroom fan before you begin wiring it. Because of this, the wiring will protect from erosion on the metal edges.

Once you’ve determined that the grommet has been properly fitted, you can insert the complete housing into the ceiling hole. Then, using the Romex cable, a non-metallic coated cable, pull this through the grommet until it is secure.

The right time to connect the wire is once the house electricity has been turned off at the panel box. There should be three colors of wire: white, black, green, or bare copper.

You have the option of using wire nuts or fast connections. After the wiring has been connected, the wiring box should install over the cable nuts.

The bathroom fan steel housing could be attached to the ceiling joists once the ductwork and wiring have been connected and tested.

Fix the housing to the joists with nails or screws to flush with the ceiling. After properly securing the housing, attach the fan motor to the housing using the provided screws.

There may be metal clips to hold the fan motor in place, or you might have to drill a few holes to accommodate the screws.

Step 14: Install The Fan Cover on The Fan

After you’ve secured the housing and the fan motor,  you can proceed to install the bathroom fan cover on the fan. Most bathroom exhaust fan coverings will still have metal clips that you’ll have to squeeze and put into the fan housing before they work.

Step 15: Turn on The Ceiling Fan

It’s time to connect the bathroom fan and do some tests on it. If there’s a housing plug,  you should use it to connect the fan motor to the housing. In that case, you will have to turn on the breakers and check the wall switch to verify if it’s working.

Can you put a bathroom exhaust fan on the wall?

Generally, these bathroom fans can place on the ceiling. However, if you want to install them into the wall, you’ll need a sidewalls bathroom exhaust fan. These kinds of fans, like ceiling-mounted fans, have connectors that vary according to the size of the ductwork to which they will be attached.

Where to route the bathroom exhaust fan?

You can install the bathroom exhaust fan right above the bathtub or shower base. However, it is adequate to place it close to the bathing area. If your bathroom has both features, a bath fan should install anywhere in the bathroom: 1. Between the bathtub and shower 2. Or even between the shower and an enclosed whirlpool tube

What do you do if your bathroom doesn’t have an exhaust fan?

If you don’t have a bathroom exhaust fan in your bathroom, use the window and door to ventilate the space and let off steam. While taking a shower or bath, try to open a window whenever possible, and leave this window open for at least 10-15 minutes after you have completed your shower or bath.

We’re done discussing how to install a bathroom exhaust fan on the first floor. However, it’ll be difficult for you if you live in an older home that never had a bathroom fan.

So, if you’re still unsure where to put the exhaust fan in your first-floor bathroom, call an expert. They can usually check into your specific problem and make recommendations. That way, you can be certain of how things will play out in your situation. 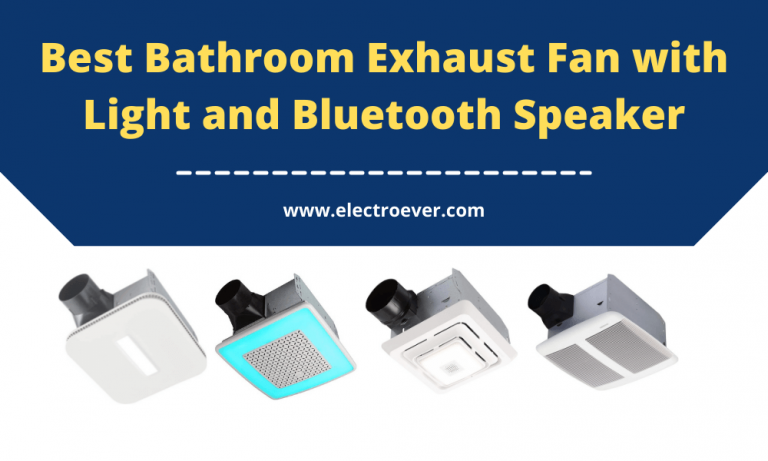 Thinking of enjoying music while getting some quality air inside your bathroom? Yes, we’ve got a solution for you that can perform two functions simultaneously. It’ll blow fresh air and create high-quality audio sounds. Modern technologies are thriving in all possible ways to make our lifestyle easier and more convenient. A bathroom exhaust fan with… 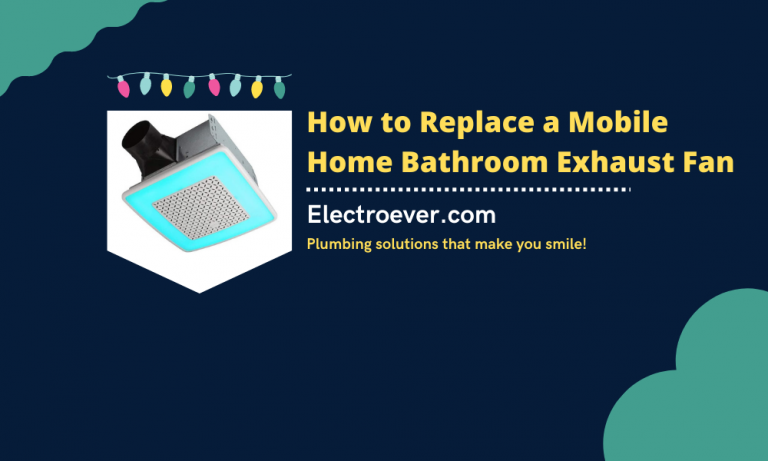